Could Fox Paws Have Prevented This?

On February 9, 2006, a 33-year-old field mechanic was killed while repairing a 1989 Volvo water truck at a customer’s construction site. The mechanic was dispatched to diagnose and repair a malfunction of the truck’s water spray system. Working underneath the truck, the mechanic discovered a kink in the water discharge hose, which he fixed. After moving his tools out of the way, he went underneath the truck again while it was running. While he was underneath the rear undercarriage of the water truck, with a 21 in. clearance, a protruding set screw on the power take-off drive shaft that runs the truck’s water pump caught on the collar of his coveralls and entangled his coveralls and shirt. His head was pulled against the rapidly rotating shaft, causing massive trauma. The water truck driver and construction site supervisor heard a noise and saw the victim fall when his clothing tore free. The victim was declared dead shortly after arrival at a hospital. 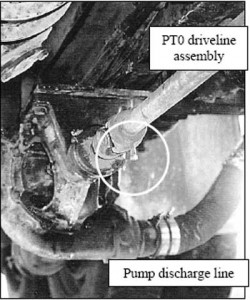 On May 23, 2003, a 13-year-old farm youth was killed when he became entangled in an unguarded rotating power take-off (PTO) shaft at the rear of his narrow front Farmall Model M tractor. (See Figure 1) The youth and his teenage cousin were raking hay in a field that had been cut a few days prior on an adjoining property. Both were driving narrow front Farmall Model M tractors equipped with a non-PTO powered hay rake designed for attachment to the tractor’s drawbar. Neither tractor had a PTO master shield installed. The victim’s tractor was ahead of his cousin’s tractor and as he had already finished raking, had driven the tractor up near the barn. The victim’s tractor had an owner-modified extension lever to activate the PTO located at the right side of the operator. This extension lever was a one-half inch (approx.) diameter steel rod with an aluminum pop can placed over the end that allowed the operator to activate the PTO lever located to his left behind the seat without turning around in his seat. The PTO shaft on the victim’s tractor had a PTO extension attachment secured by an unshielded 5/16-inch bolt that protruded approximately 1-¼ inches beyond the shaft. Another individual installing a fence nearby saw the victim dismount from the tractor. It is unknown if the victim had disengaged the PTO before he dismounted, how the victim dismounted the tractor, and when the extension’s bolt caught the right arm of victim’s sweatshirt. After his cousin finished his raking, he pulled up behind the victim’s tractor. He walked to the victim’s tractor, saw the victim, turned off the tractor, and ran to the property owner’s house to notify him. The individual installing the fence saw the cousin run to the property owner’s house and went to the victim’s tractor. Seeing the victim, he called 911. Emergency personnel arrived and the youth was declared dead at the scene.

Exposed rotating shafts are hazardous situations that can cause serious injury, and in this tragic incident, death. The International Harvester owner’s manual for the Farmall M and MV series tractors states that the engine speed, governed, at maximum full load is 1450 rpm. The power take-off shaft speed is listed at 537 rpm. A PTO operating at 540 rpm rotates around nine times/second. It takes only about one second to completely strip off an article of clothing, or if the cloth does not tear away, to wrap a body or body part around a shaft. Clothing is pulled around the shaft much quicker than a person can pull back or take evasive action. Even a quick reaction time, ½ of a second, would permit a piece of clothing to wrap around a shaft rotating at 540 rpm at least two times. In this incident, the tractor was at “idle” speed. The engine low “idles” at 425 rpm according to the International Harvester shop manual No. IH-8. The PTO shaft would be rotating at approximately 157 rpm, causing the shaft to rotate around approximately two times/second. At this rpm and rotational speed, the protruding bolt on the stub shaft could still catch a person’s clothing and begin to wrap the clothing around the shaft before the person can react.

On August 15, 2002, a 14-year-old male farm worker (the victim) died after falling into an operating cattle feed grinder/mixer. The victim was using a handheld hay hook to drop hay bales into the operating grinder from the top of a stack of hay bales. He apparently lost his footing, slipped, and fell into the grinder. Approximately 20 minutes later, a coworker entered the area and noticed that the grinder was running unattended. He then called out to the victim and received no response. After looking into the mixing/grinding area of the machine he realized that the victim had fallen into the operating grinder and immediately stopped the machine. Emergency Medical Service (EMS) was summoned via 911 and responded within minutes. The coroner pronounced the victim dead on site 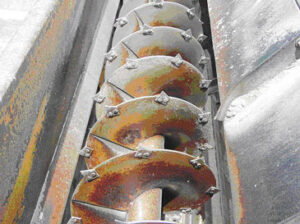 Five women in New York have been scalped and/or suffered severe facial disfigurement due to their hair becoming entangled in hay balers. An article in this week’s edition of the CDC Morbidity and Mortality Weekly Report (MMWR) recounts the details of four of these incidents and explores probable causes. All four incidents involved a secondary driveline which powers bale throwers on hay balers manufactured by New Holland in the early 1970’s. The bale throwers that post this hazard are Models 54A, 54B, 58, and 62, which were placed on a variety of New Holland hay balers. Although these models are no longer manufactured, an unknown number remain in use. It is essential that all farmers, farm family members, and farm workers be alerted to the hazards of working with this and other farm machinery.

A photograph of this machinery is available immediately to any newspapers or media outlet with telephoto receiver or electronic darkroom that can accept overhead transmissions. To electronically retrieve this information, call 214-416-2686. There is no charge to the media.

The secondary drivelines in these incidents were shielded; however, because of the inverted U-shape design, sometimes referred to as a tunnel guard, the shield did not completely enclose the secondary driveline. Furthermore, the driveline is located only 4 feet above the ground. It is difficult to see that the bottom of the shaft is not enclosed, which may give the operator an unintended false sense of security and contribute to these injuries. Since the mid-1970’s the manufacturer has acknowledged the potential hazard of the tunnel guard and has had a retrofit guard available that would reduce the hazard. Bale throwers currently manufactured by Ford-New Holland (formerly New Holland) are equipped with a shield which fully encloses the driveline.

In all four cases, the victims did not shut down the machine before dismounting their tractors. Shutting down the machinery is a vital safety practice recommended in the operator’s manual for these balers and recommended whenever adjusting any machinery. As these four cases illustrate, the presence of shields alone does not remove all possible hazards. The following injuries resulted from hair becoming entangled in the rotating secondary driveline that powered the bale thrower.

In July 1991, a 47-year-old female had her entire scalp from the back of the neck to the facial browline removed. The injuries required extensive skin grafting and left her permanently disfigured.

In July 1976, a 43-year-old suffered complete removal of her scalp and series facial injuries, which necessitated extensive reconstructive surgery.

The scalping injuries described above represent only one form of entanglement. Entanglement may also result in amputations, other severe injuries, and death. During the 9 year period from 1980-1988, an average of 16 workers, 16-years of age or older were killed by entanglements in power take-off (PTO) or similar rotating drivelines on agricultural machinery each year, according to NIOSH. In addition, between 1982 and 1986, there were an estimated 148 work-related hospital emergency room admissions annually for nonfatal injuries involving PTOs nationwide.

Entanglements involve recognized hazards and can be prevented. The four serious injuries described in the MMWR involved an inadequate U-shaped guard, for which a retrofit has been available for nearly 16 years.

Because of supply line issue's, call 208 231 5860 for availability and possible price increases before you order online Dismiss